The European champions are not standing still.

Weeks after overcoming Liverpool in the Champions League final, Real Madrid have beaten them to the signing of Monaco midfielder Aurelien Tchouameni.

The 22-year-old is on the cusp of following France team-mate Eduardo Camavinga to the Santiago Bernabeu in a deal worth over € 100 million as Carlo Ancelotti continues to reinforce his midfield.

Tchouameni only arrived at Monaco from Bordeaux in January 2020 having made his professional debut at the age of 18, but he has shone since becoming a regular.

The Athletic has recently introduced Tchouameni the man, the character, the personality.

But what about Tchouameni the player?

As the adage goes, the best ability is availability, but plenty of trust has been placed in Tchouameni as Monaco look to return to the summit of French football.

No outfield player has played more for Monaco than Tchouameni this season, having started 33 of Monaco’s 38 games as they finished third in Ligue 1.

Casting the net wider, Tchouameni has logged the fifth-highest minutes among under-23 players across the top five European leagues since the start of 2020-21.

For such a young player, he arrives at the Bernabeu with experience. 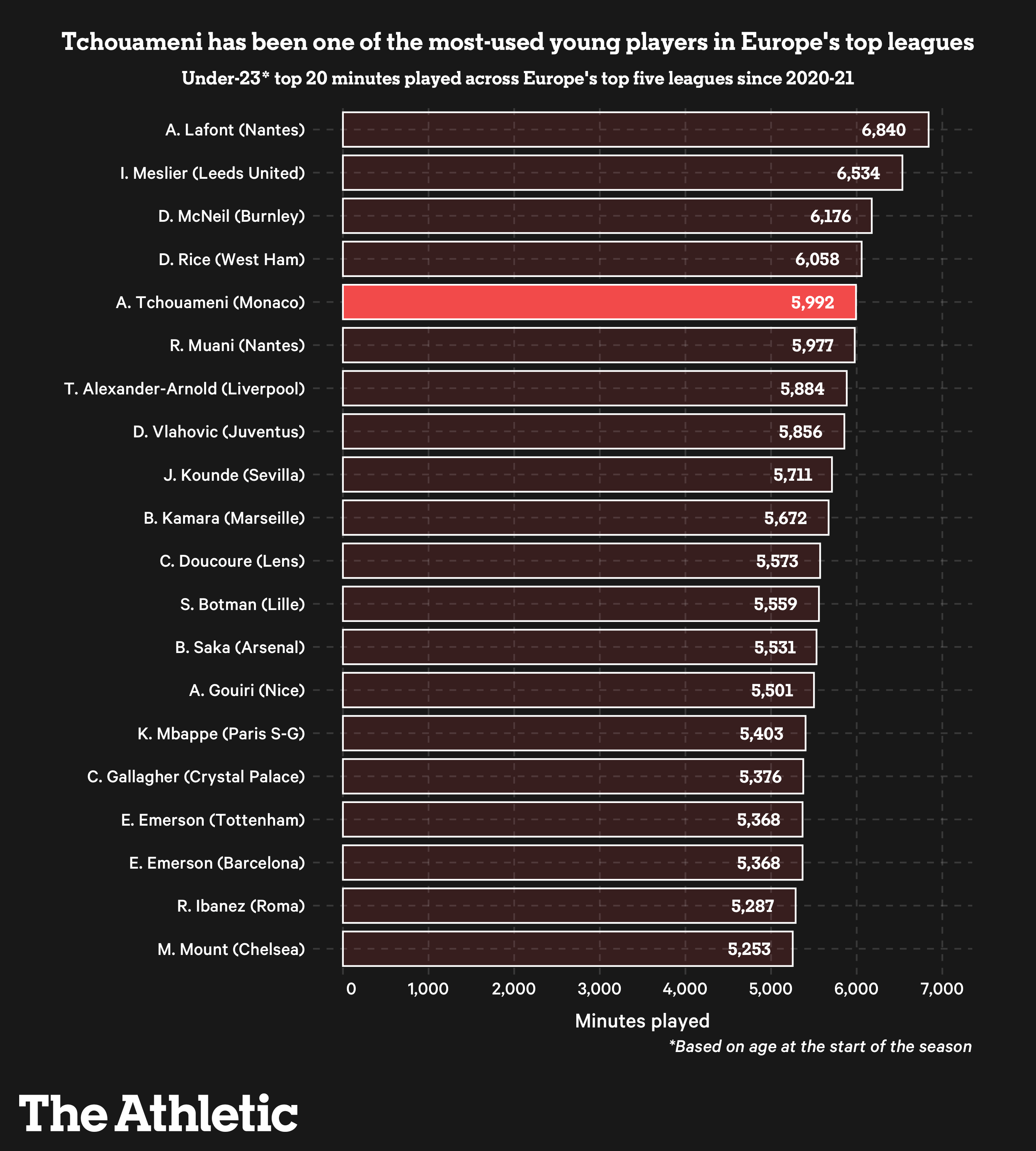 Positionally, Tchouameni has most frequently played in a defensive midfield role alongside Youssouf Fofana in a 4-2-3-1. However, he is more likely to play in a slightly deeper role than his midfield team-mate, screening the defense and getting more involved in Monaco’s build-up play. 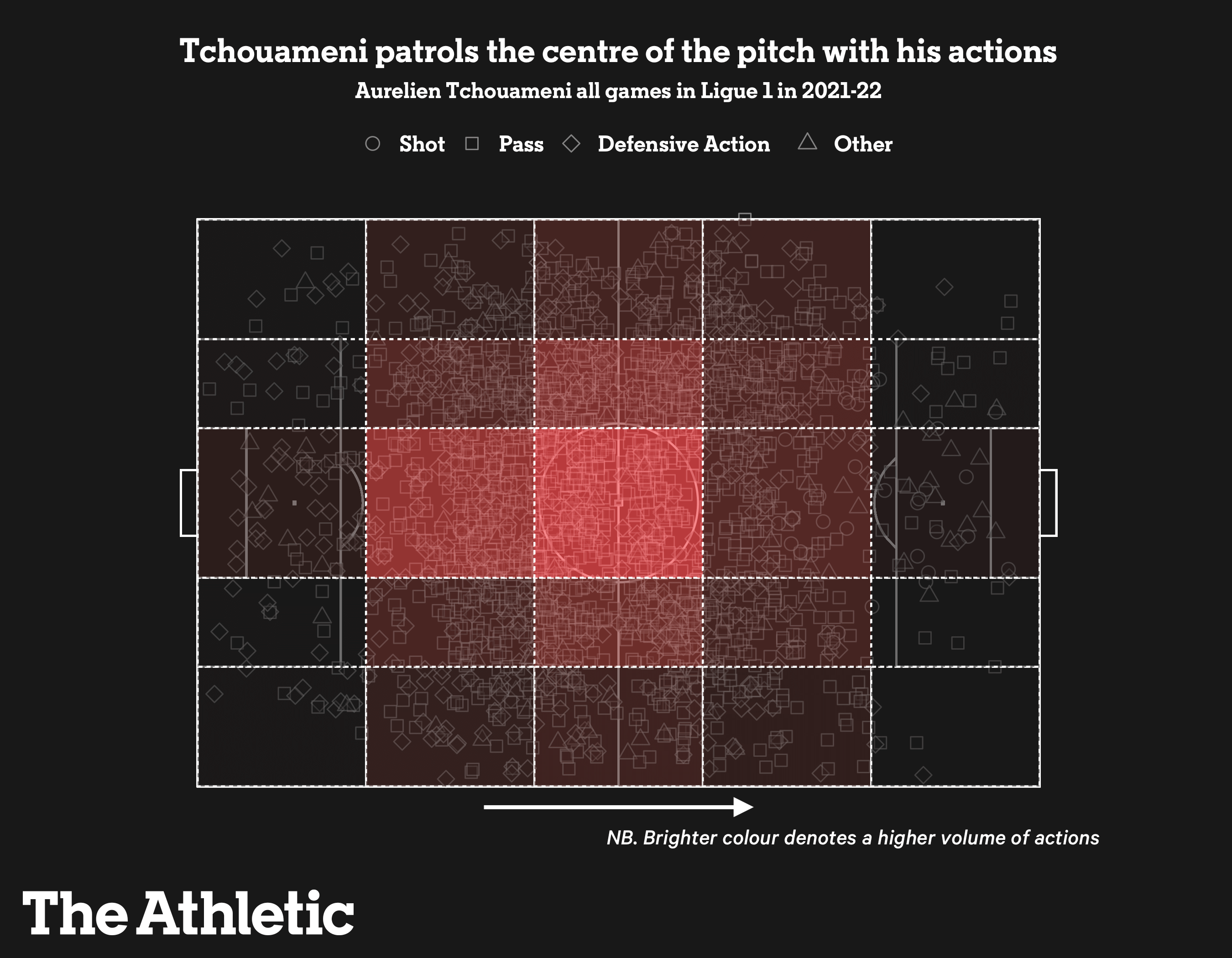 Crucially, his versatility must not be underestimated, as Tchouameni has the engine and the maturity to also play as a lone defensive midfielder in a 4-5-1, or in more of a box-to-box role as a No 8 within a 4-4-2. 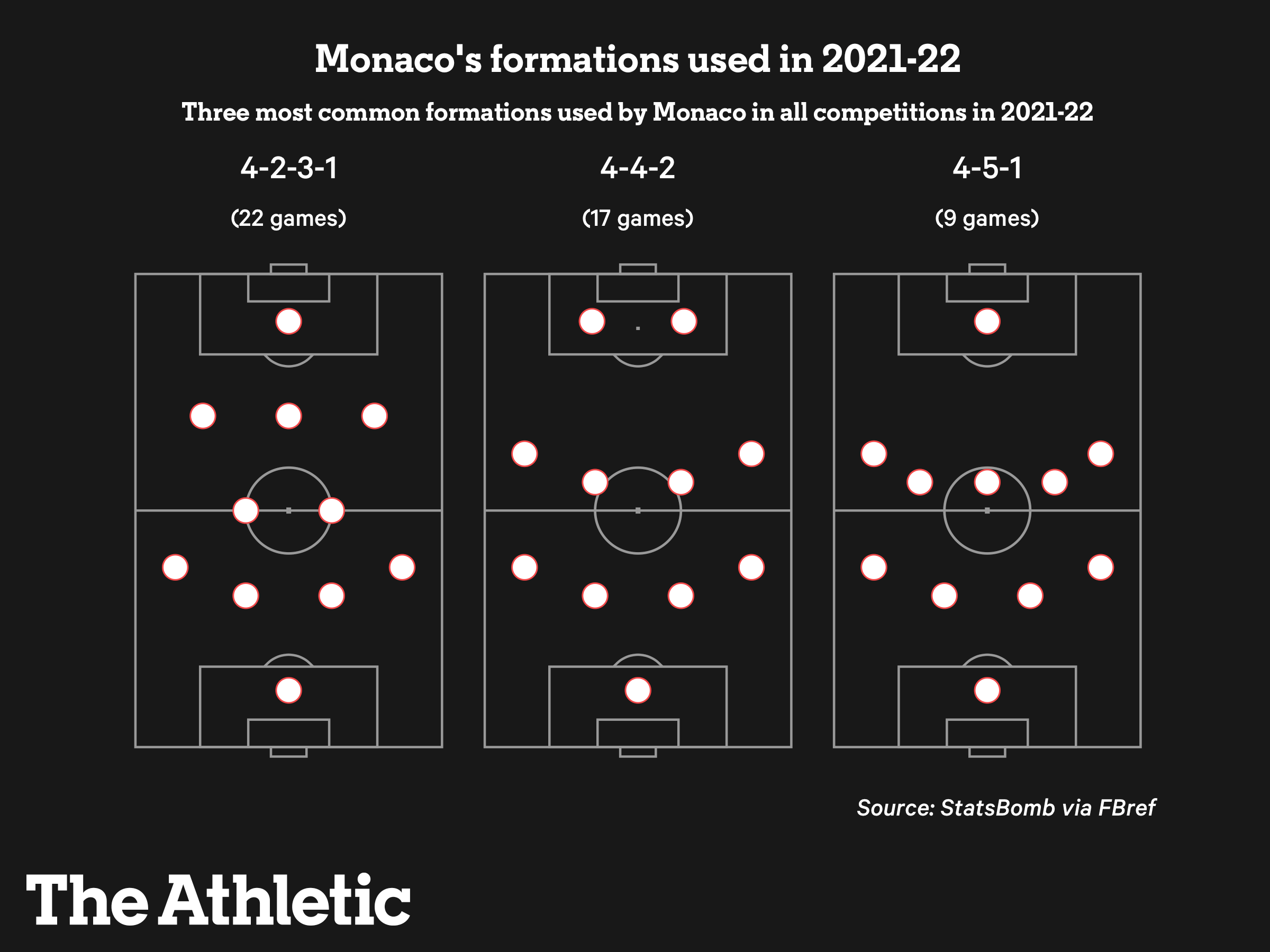 This positional versatility is unquestionably a useful trait for any player to have, but as long as Ancelotti is at the helm in Madrid, 4-3-3 is likely to prevail. The Italian manager has selected that formation in all but three of their games in all competitions this season.

Of course, any midfielder who has arrived at Real Madrid in the past five years has been met with the small task of displacing one of Europe’s most successful trios in Casemiro, Luka Modric and Toni Kroos. Modric, in particular, is still going strong at 36 but age is creeping up on all of Ancelotti’s most-used midfield three, who have now entered their 30s. Succession planning makes sense in the medium-to-long term, as evidenced by Camavinga’s signing last summer. 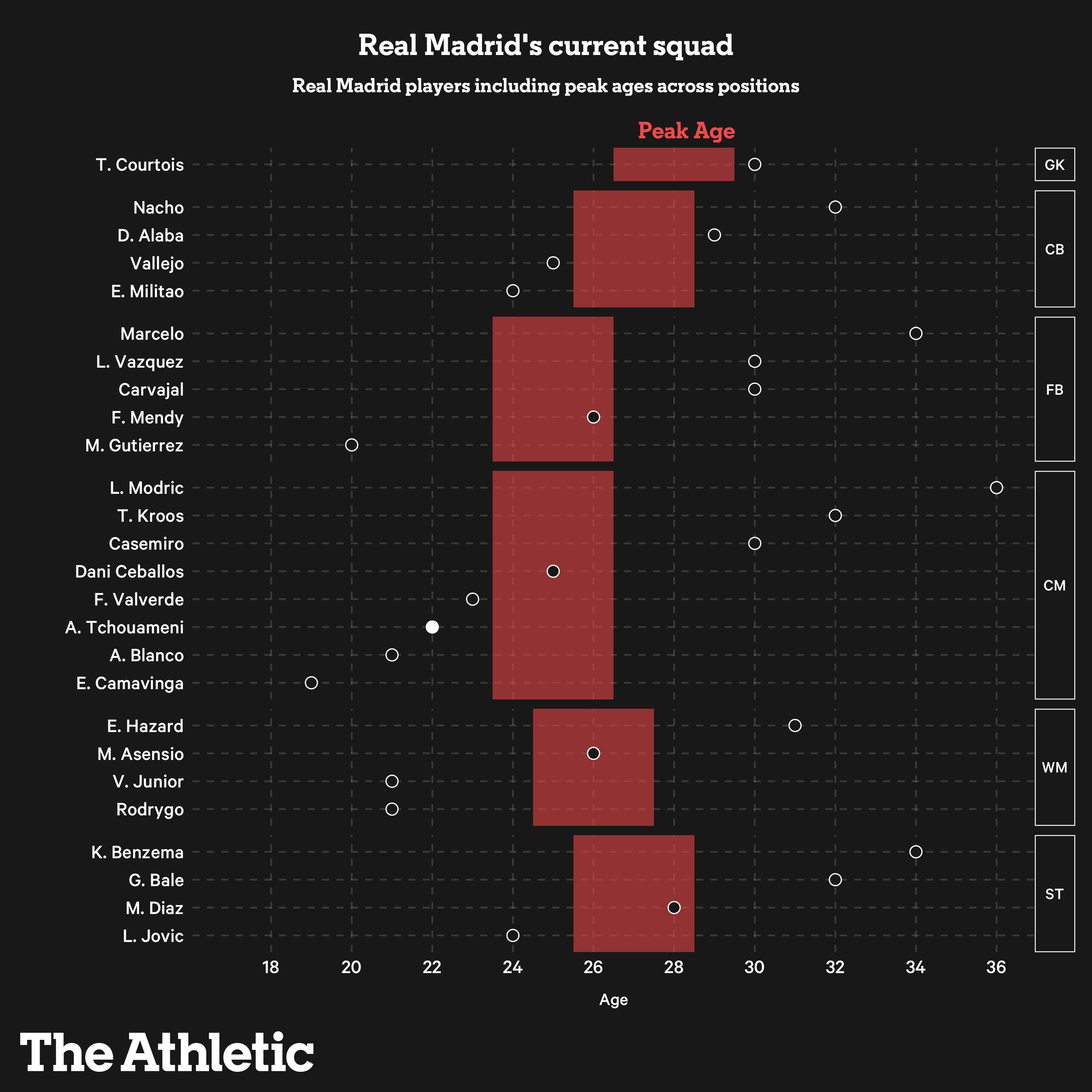 Although Camavinga has had a crucial role in Madrid’s La Liga and Champions League success – particularly from the bench – the Frenchman was not expecting to be a regular in the first XI in his first season. The 19-year-old’s minutes in Spain have been lower than last season at Rennes, but he has acted as an able deputy to Ancelotti’s preferred midfield three when he has entered the fray.

At a slightly more mature 22, Tchouameni will arrive with different expectations, and will no doubt seek to showcase his skill set regularly. His positional versatility means that he would be able to fit in as a defensive midfielder – the position predominantly occupied by Casemiro – or in one of the “No 8” roles occupied by Modric and Kroos.

So what should we expect from Tchouameni, who has been voted into the Ligue 1 team of the year in consecutive seasons?

One of Tchouameni’s main characteristics is his combative and relentless ball-winning ability. Using data from smarterscoutyou can see how well he reads the game, frequently picking up loose passes and blocking passes (ball recoveries and interceptions 88 out of 99 for a defensive midfielder). 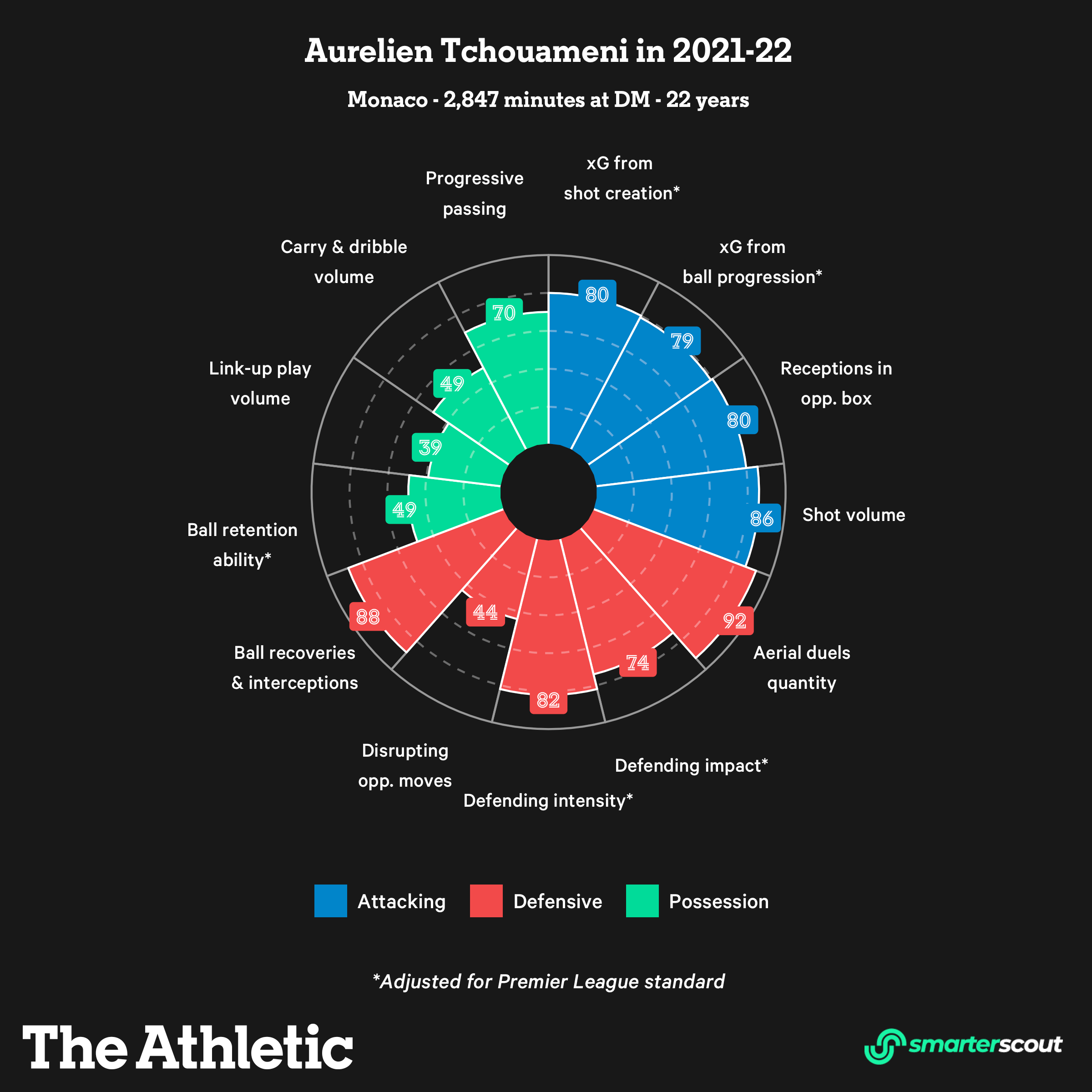 Not only is Tchouameni high volume in his defensive actions, but he is also high quality. Getting tight to his man is one thing, but using data from StatsBomb via FBref you can see that the success of his pressures – ie, his team winning possession within five seconds of his pressure being applied – stands at 36 per cent, which is in the top 10 per cent of midfielders in Ligue 1 this season.

Alongside his defending impact of 79 out of 99, it shows how proficient Tchouameni is at preventing the opposition from progressing further up the field.

At 6ft 2in, his long legs allow him to snuff out attacks before they materialize with his destructive breaking up of play. One particular strength is his intelligent defensive work on the blindside of his opponent, which allows him to nick in front and intercept as they receive it.

A perfect example can be seen in Monaco’s recent defeat to Paris Saint-Germain. Here, PSG’s Marquinhos is ready to play the ball wide to right-back Achraf Hakimi. At this point, Tchouameni is already scanning the pitch for danger, spotting Georginio Wijnaldum dropping in to receive the next pass. 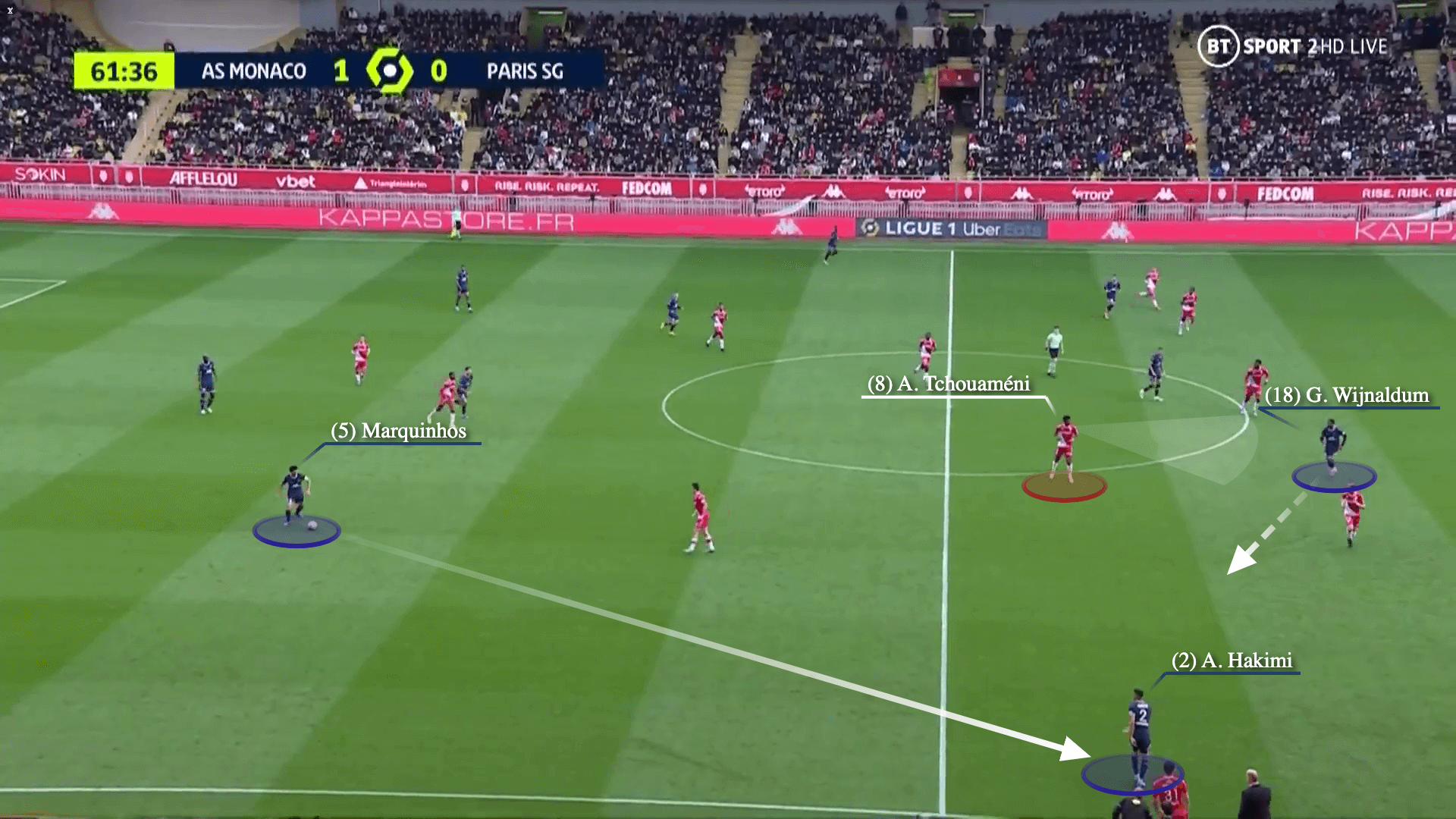 Rather than enter the space in front to block the pass, Tchouameni allows Wijnaldum to meet the ball and runs behind him to immediately get goalside, running away from the ball as the pass is being played. 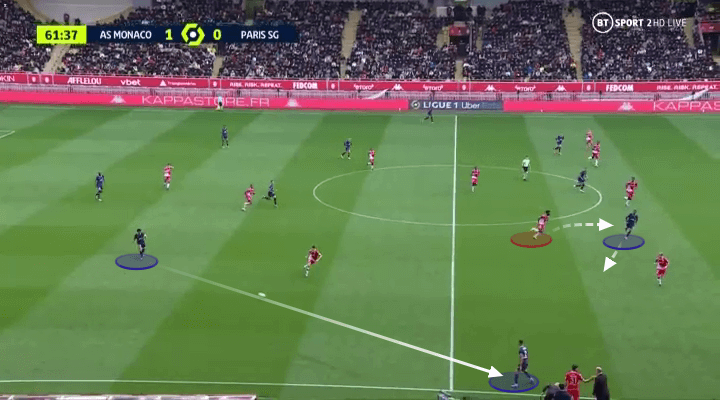 Now behind Wijnaldum, Tchouameni tracks the Dutchman to stay tight and remains just out of view as he waits for the ball to be released… 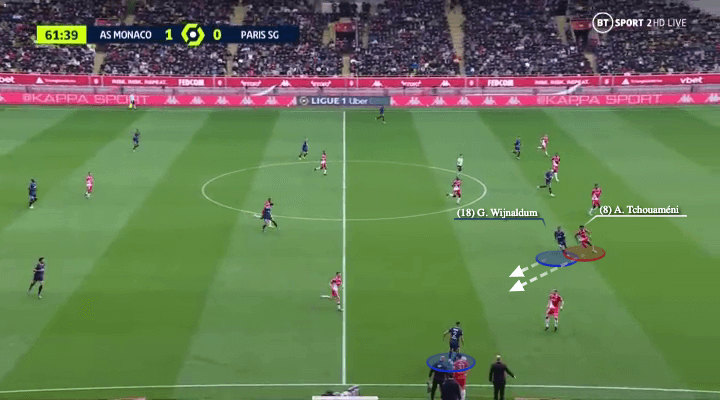 … Before accelerating to get in front of Wijnaldum on the blindside and intercept the ball as Hakimi plays the pass. It is a common feature of Tchouameni’s play that is certainly by design rather than luck. 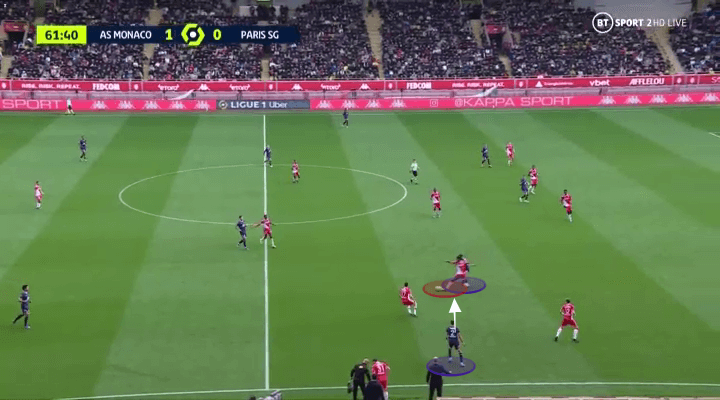 Examples like this show that Tchouameni does tend to go to ground when making challenges. This is often warranted but that full-force style is something to be wary of – he will need to ensure he does not overcommit as he adapts to the demands of a new league.

Ultimately, that inability to beat Tchouameni in a one-v-one is backed up by his smarterscout duel ratings. These ratings are calculated by considering the quality of the opponent faced in those duels – for example, a player gets more credit for tackling good one-on-one dribblers than weaker ones.

Not discounting Real Madrid’s other midfielders across the squad, Tchouameni’s strength in duels stacks up well against the leading midfield trio of Modric, Casemiro and Kroos. In particular, his numbers demonstrate how frequently he comes out on top in his challenges made (tackling 75 out of 99), more so than his new team-mates. Such strength in duels is not just reserved for the ground though, as Tchouameni exhibits a powerful presence in the air (open-play headers 99 out of 99), similar to that of Casemiro. 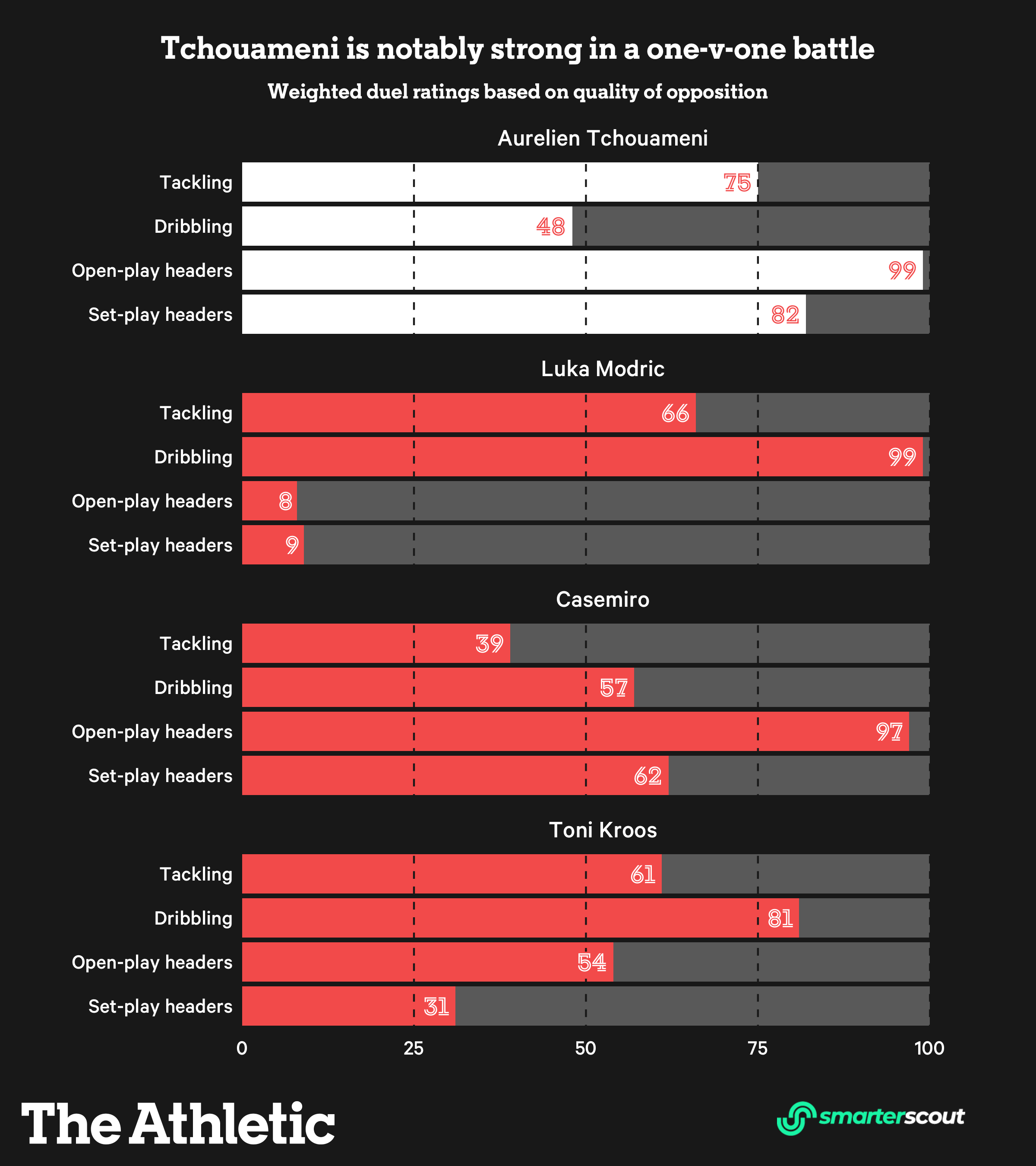 As well as his combative traits, Tchouameni has a good passing range when he does regain possession. When he has it, he frequently looks for a pass that will advance the team upfield (progressive passing, 70 out of 99), and most importantly, get the ball into dangerous areas (xG from ball progression, 79 out of 99).

Here’s an example from Monaco’s visit to Metz, where Tchouameni collects the ball with the opposition still in a neat, compact structure. 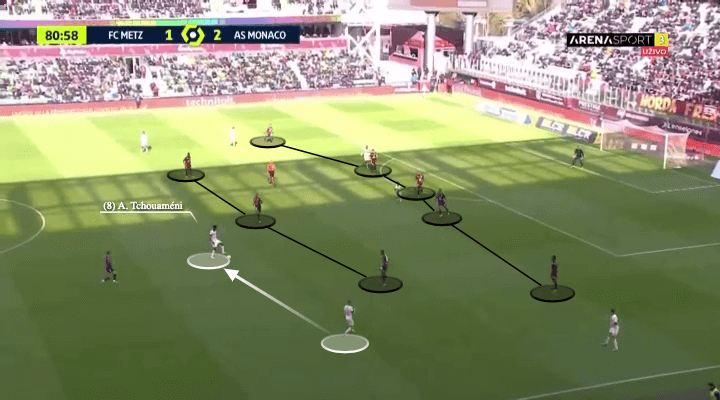 As he advances, right-back Vanderson looks to run in behind where the space is. Tchouameni duly obliges with a line-breaking pass inside the opposition full-back and into the penalty area. 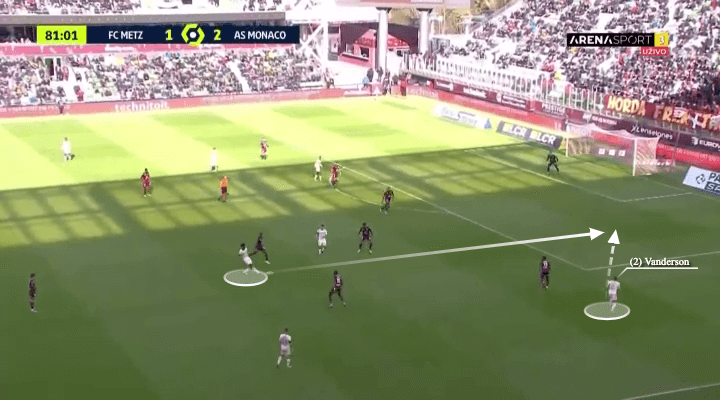 Vanderson receives the ball in an advanced area, allowing him to pull the ball back for a valuable chance. The opportunity is squandered, but the highest value added to the sequence was provided by Tchouameni’s pass. Just imagine Tchouameni’s attacking threat with Vinicius Junior, Rodrygo and Karim Benzema ahead of him. 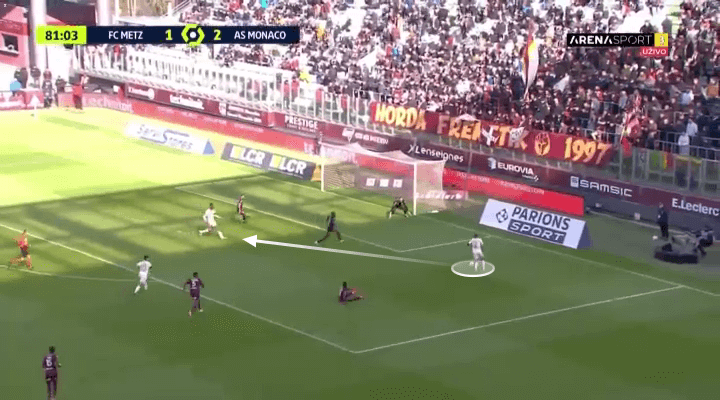 The trust that has been placed in Tchouameni is not confined to his club football. As well as playing for France in last year European Under-21 ChampionshipTchouameni has since earned eight caps for the senior national team, where he has established a productive partnership with more defensive discipline alongside Paul Pogba.

Such is his profile that Tchouameni was entrusted to play in France’s Nations League final against Spain, which Didier Deschamps’ side won 2-1, and has been regularly called up to the squad since.

Could Tchouameni become one of the world best at Real Madrid?#RMCF

At club level, Tchouameni is yet to announce himself on the biggest European stage. While he has tasted Europa League football with Monaco and Bordeaux, he will no doubt be desperate to showcase his skills in the Champions League with his new employers – and who better to represent than the current Champions League holders?