The return of Spain internationals Alvaro Morata and Saul Niguez, who should be in the prime of their careers, could be taken as a real positive for Atletico Madrid for the start of the 2022-23 campaign.

Yet the reality is Atletico are not really happy at all to be stuck again with Morata, 29, and Saul, 27, two big earning players whose relationships with coach Diego Simeone were directly behind both leaving on loan for Juventus and Chelsea.

Had the Turin and London clubs exercised options to buy both players for around €35 ​​million each, the money would have been really useful for Atletico, especially to balance their books for 2020-21.

Instead, both are returning to add another almost €20 million between them to the club’s wage bill across players and coaching staff. At over €300 million, that salary cost is already running far beyond both the club’s ability to pay it and the team’s current competitive level on the pitch.

Atletico’s situation is not quite as dramatic as Barcelona’s, but the club has big historical debts and are always walking a financial highwire.

Rojiblanco club president Enrique Cerezo admitted this week the club needed to raise €40 million in player sales before they could start to strengthen their squad. Also, having breached their La Liga salary limit last season, Atletico can only reinvest at most 33 percent of any money they raise from selling players.

How Atletico CEO Miguel Angel Gil Marin and sporting director Andrea Berta maneuver within such financial restrictions during this summer’s transfer market will be interesting to watch.

Whether Saul and Morata feature in Simeone’s team for 2022-23 is even more fascinating to consider.

Saul had seemed destined to take a place right at the center of Atletico’s team ever since he made the switch from Real Madrid’s youth system aged 13. He emerged on the first team scene four years later looking like a complete midfielder who could run, pass, tackle and score. But as the seasons progressed, his own performances seemed to go backwards and his relationship with Simeone was never quite right.

The situation came to a head during the 2020-21 campaign when Atlético won the La Liga title, but Saul did not play a big role. The biggest issue was over his position — the player felt he needed to be in a box-to-box midfield role, the coach felt he was most useful to the team as a left wing-back. There were also concerns over his confidence and fitness to the point where he felt the need to openly apologize to fans for his own performances.

So in summer 2021, Saul wanted to leave permanently and Atlético were eager to sell him. A player who a few years previously had been on the transfer radars of all of Europe’s richest clubs was clearly on the market. But there were no serious offers from other clubs for a permanent deal before a loan to Chelsea was done at the last minute.

On arrival in London, Saul openly said he had been affected by being whistled by his own fans at the Metropolitano and needed time to get “Atletico out of my head”. A good run in the Chelsea team would have helped, but it never came. He was subbed off at half-time of a very underwhelming Premier League debut against Aston Villa and made little impression over 23 games in all competitions. In an ironic twist, Chelsea manager Thomas Tuchel also saw the value in using him at left wing-back when required. There was never any chance of the loan deal being made permanent.

So he and Atletico are back to square one. 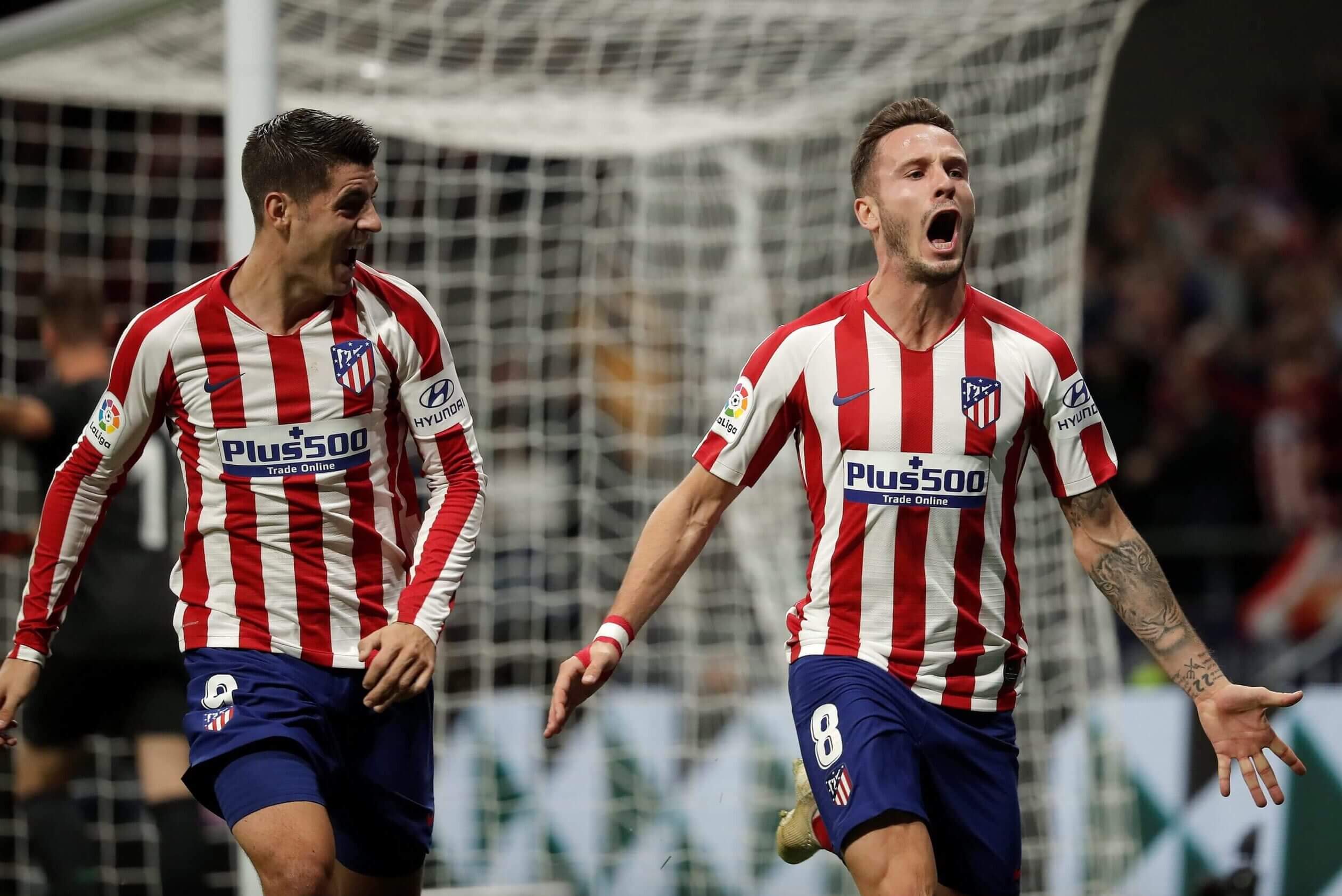 His current contract, signed in 2017 amid fears he would leave for Barcelona, ​​earns him €7 million a year and runs all the way to 2026. That seemed smart business by the club hierarchy at the time, ensuring a big transfer fee if he did leave, but now it means they are stuck with his salary (and an equal amount in taxes) for four more years.

The Athletic has been told Saul did not burn any bridges before he left and that Simeone will welcome him back into the squad, but there will be no guarantees about playing in his favorite position. Atletico’s priority to strengthen their midfield for 2022-23 is pretty clear by the club lining up the signing of former Borussia Dortmund midfielder Axel Witsel on a free transfer. Koke, Geoffrey Kondogbia, Rodrigo De Paul, Thomas Lemar and Marcos Llorente will also likely start the season ahead of Saul in Simeone’s midfield pecking order.

Morata’s situation is even more complicated. Atletico made a huge deal of bringing the former Real Madrid striker back to La Liga from Chelsea on an initial loan in January 2019, and Morata himself spoke about coming home to his boyhood club. That move was made permanent in July 2020, but by then the striker’s long-term situation at the Metropolitano was already troubled.

Simeone thought the best way to get a player with great physical and technical gifts — but also an introspective and restless personality — to perform regularly was to show some tough love, but that didn’t work out. Morata was in and out of the team until a final straw when Diego Costa, clearly past his best, was preferred for the Champions League quarter-final against RB Leipzig in summer 2020.

Morata that night instigated a frank exchange of views, after which neither coach nor player were keen to work together again.

That led to Atletico accepting a two-year loan deal for Morata to play again for Juventus, where he has had the most settled period of his career. The Metropolitano hierarchy really wanted Juve to make that deal permanent by paying €35 million before June 30, but that day saw the Italians release a statement saying farewell and ‘Grazie de tutti Alvaro’.

Both Atlético and Morata’s camp are saying things can be patched up, but that looks very unlikely. Luis Suarez has left with his contract up, but Simeone does not necessarily need a direct replacement. Antoine Griezmann and Joao Felix finished last season as his preferred first-choice attack, while 23-year-old Brazilian No 9 Matheus Cunha should play more after an encouraging first season in La Liga. Angel Correa can also feature in any of the attacking positions.

It is in nobody’s interests to have a moping Morata sitting on the bench when the season starts. Especially Luis Enrique, the one coach who has always shown unflinching faith in him, wants him to start for Spain at November’s World Cup in Qatar.

Some at the Metropolitano still hope that Juventus might come back later in the window with a lower offer for Morata, who still has two years left on his Atletico deal. Sevilla are also on the lookout for a goalscorer, and their coach Julen Lopetegui picked Morata for Spain, but the Andalusian club would not be able to come close to matching his current wages.

Many of the conversations at Atletico this summer come back to wages. Atlético’s squad is now very expensive, especially considering the level the team played last season. Suarez and Griezmann were the top earners last year, albeit on significantly less than they earned at Barcelona. Others have signed big deals to ward off suitors elsewhere, including goalkeeper Jan Oblak and club captain Koke.

Key players including Stefan Savic, Jose Gimenez, Correa and Llorente have all renewed their contracts with the status of La Liga winners, but then did not perform at that level through 2021-22. Simeone is reportedly the best-paid coach in all of world football, while his assistants get well looked after too.

“You know that we are subject, like all clubs, to La Liga and have to fulfill some financial commitments,” Cerezo said earlier this week. “To sign players we need to sell and raise €40 million. The market is not easy, it is very difficult. We will see who we sell and who we buy.”

Cerezo also confirmed that Atletico had already agreed to sign Belgian midfielder Witsel on a free after he left Borussia Dortmund at the end of last season. They had previously made a big effort to sign 22-year-old midfielder Boubacar Kamara from Marseille, but could not match the terms on offer from Aston Villa. That is the reality — even playing every year in the Champions League, Atletico cannot compete financially with a mid-level Premier League team.

The players Atletico would be open to selling include Mario Hermoso, Lemar, Vitolo, Santiago Arias, Croatian goalkeeper Ivo Grbic and Daniel Wass (who only joined for €1.5 million from Valencia in January). Their problem is the lack of a market for these players — Vitolo is close to joining Segunda Division Las Palmas, but no serious offers have yet been received for the others.

Meanwhile, those Atlético could more easily sell to raise funds — Oblak, Joao Felix, Carrasco, Llorente — they really want to hold onto. Finding buyers for Morata and Saul would be the obvious answer, and could suit all parties if interested suitors can be found.

Atletico have already announced one new signing for next season — 22-year-old Brazilian winger Samuel Lino for €6.5 million from Portuguese club Gil Vicente, where he scored 12 goals and gave five assists last season. As things stand, he cannot be registered with La Liga, and Simeone has other priorities, so he looks almost certain to be sent on loan.

More indicative of Atletico’s situation would be the squad’s long-term back-up Sime Vrsaljko to continue on reduced terms and midfielder by trade Llorente to keep filling in next season. Berta and Simeone like to have such ‘flexible’ players so they can keep just 20 senior squad members. That might help financially, but it has risks. Like Saul before him, Llorente clearly prefers playing in the middle and his form suffered badly when used out wide last season.

For Atletico to really restructure a team which needed a late run of form to finish third in La Liga last year, they would need bigger sales. Which is where Morata and Saul come back in. Atletico will have an interest in Spain international midfielder Carlos Soler, whom Valencia would like to sell. But selling Saul for enough to be able to afford Soler looks difficult, especially with La Liga’s 1:3 restriction in place.

Atletico are used to going down to the wire to do their summer business — as seen with last summer’s deadline day deals involving Griezmann and Saul. Just because players report back next week to begin the punishing pre-season under fitness coach Oscar ‘El Profe’ Ortega does not mean they will necessarily be in Simeone’s plans for the new campaign.