Ares Management is backing two bidders in the race to buy Chelsea Football Club from billionaire Roman Abramovich, who put the team up for sale after Russian invasion of Ukraine.

The investment group, which has more than $ 300bn of assets under management, is prepared to take a minority stake in the English Premier League team, adding to its considerable portfolio of sports assets, according to people with knowledge of the matter.

Ares has agreed to back the bid led by private equity tycoons Josh Harris and David Blitzer, or the one from Stephen Pagliuca, co-chair of US private equity firm Bain Capital, and National Basketball Association chair Larry Tanenbaum, if either prevails, the people said.

The two groups are going up against a third shortlisted bid for the club, spearheaded by financier Todd Boehly and Santa Monica-based asset manager Clearlake Capital, in an auction handled by US merchant bank Raine Group.

Buying into the club would add to a series of recent sports investments by Los Angeles-based Ares, which has highlighted its desire to provide “long-term, patient capital” to the sector.

The pandemic coronavirus has accelerated institutional investment into sport. Leagues and teams have been forced to strengthen their finances after losing billions of dollars in revenue while fixtures were at first postponed and then played behind closed doors without fans in attendance.

Harris and Blitzer, who are joined in their bid by Formula One driver Lewis Hamilton, tennis champion Serena Williams and City of London grandee Martin Broughton, have lined up a trio of banks to provide debt financing to bolster their financial resources.

Bank of America, JPMorgan and Wells Fargo are providing a £ 500mn term loan over five years to Harris and Blitzer’s bid, which is fronted by Broughton, and an additional £ 100mn revolving credit facility, according to bankers with direct knowledge of the matter. The three banks declined to comment.

“The option for a committed credit facility exists only to provide potential further liquidity to the club,” a spokesman for the Harris and Blitzer bid said, adding that the funds “are purely incremental to the consortium’s all equity bid proposal” and there are no current plans to draw down on the facility.

The financing package also establishes relationships with three major banks ahead of plans to redevelop Chelsea’s home stadium, which has a far smaller capacity than its major rivals in the Premier League. 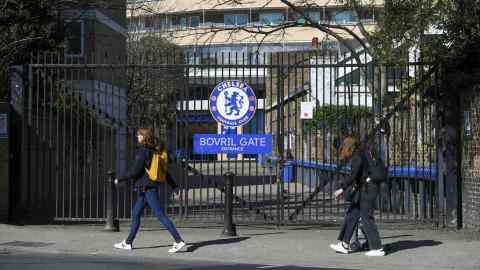 Ares’ commitment to the Harris bid “has no maturity, no covenants, places no restrictions on the club and pays no coupon”, the spokesman added, emphasizing that they “would be one of the most diverse ownership groups in the Premier League – representing a variety of cultures and backgrounds that is representative of Chelsea’s players, supporters and the global football community ”.

Raine could name a preferred bidder for Chelsea as soon as next week. The transaction requires the green light from the Premier League and special approval from the UK government, which has said that Abramovich, who is under UK sanctions, cannot benefit from the sale. The Russian billionaire previously pledged to donate the net proceeds to charity.

Bankrolled by his wealth, Chelsea has repeatedly won the highest honors in world football. Under Abramovich, who has owned Chelsea since 2003, the club has won the league title five times and is a two-time winner of the Uefa Champions League, Europe’s most prestigious club tournament.