Erling Haaland’s impending move to Manchester City was officially announced on May 10.

Two weeks later, he was on a private jet to Manchester, where he had dinner with club executives, started exploring potential new homes and spent a full morning at the City Football Academy.

Almost a month on from City’s low-key confirmation that an “agreement in principle” was in place for Haaland to join them from Borussia Dortmund on July 1, no official footage of the striker wearing their shirt has been released.

Manchester City can confirm that we have reached an agreement in principle with Borussia Dortmund for the transfer of striker Erling Haaland to the Club on 1st July 2022.

The transfer remains subject to the Club finalizing terms with the player.

Cue the despair of City fans on social media, tirelessly asking for any update and #AnnounceHaaland becoming a common hashtag.

A self-recorded video of Haaland on Sunday nodding his head along to Oasis’ Wonderwall is the closest we’ve got so far.

Two weeks ago, the 21-year-old was spotted by staff at the club walking around the training ground facilities dressed up in City gear, ready to go through his unveiling photoshoot.

All the content is in the can and ready to go. But it is not yet online because Haaland, on and off the pitch, is a special case.

“As soon as he is a City player, the content will come,” said a source, although there are not thought to be any legal obstacles in terms of agreeing personal terms or making further announcements before July 1.

More pertinent is City’s desire to squeeze every last drop out of the impact of signing a global superstar.

A special unveiling event dedicated to the Norwegian is planned, which will end in a meet and greet with fans – similar to those enjoyed by Jack Grealish, Riyad Mahrez, Rodri and Joao Cancelo when they came to the club.

That will come after a social-media campaign, which may begin as early as the start of next week.

City have to ensure things are done the right way, though.

Haaland is away with the Norway national team at the moment, and has scored three goals in their first two 2022-23 Nations League matches to help them to two wins and six points. His international goals tally now stands at 18 in 19 appearances. 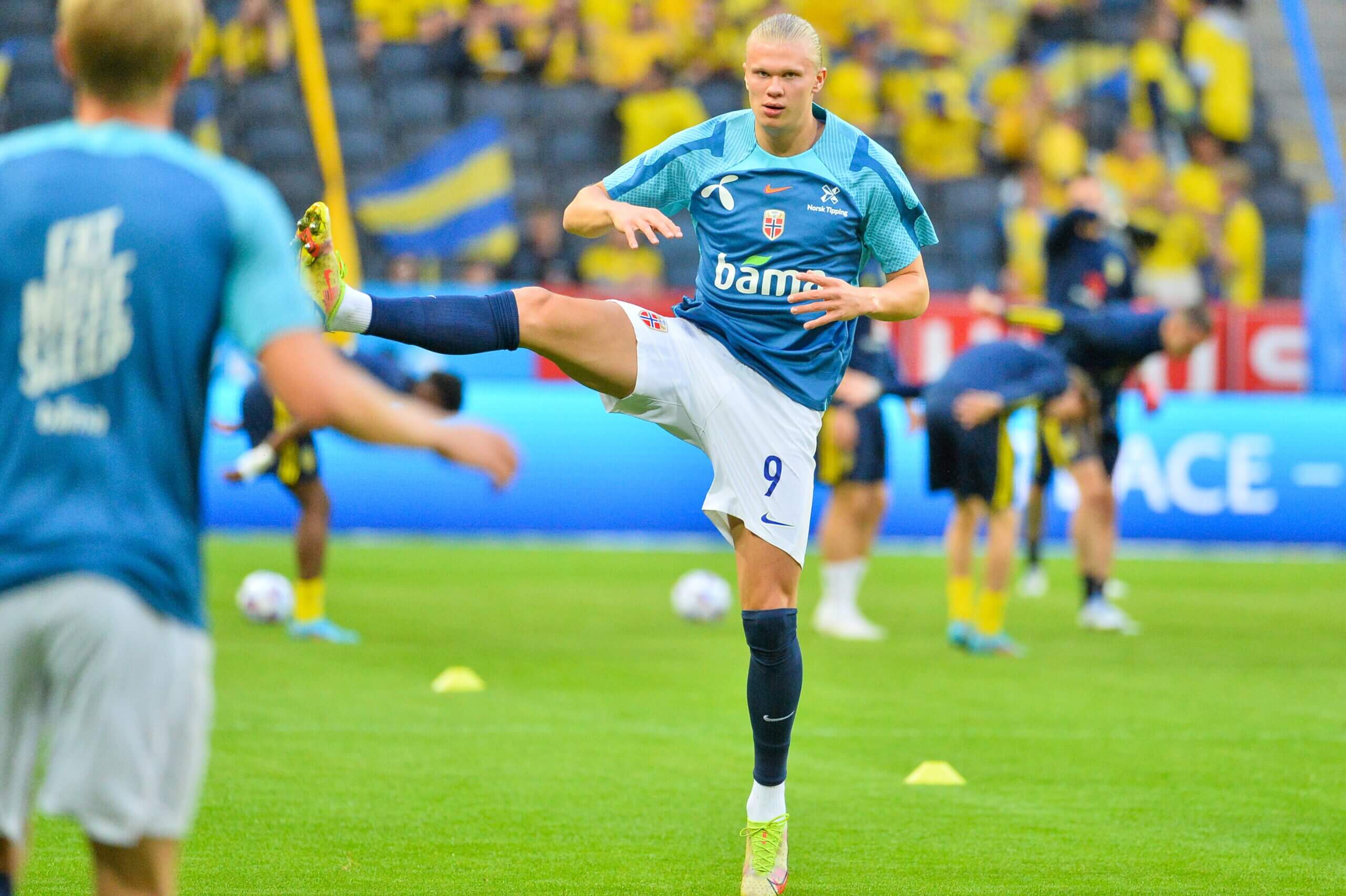 After two more games, both at home in Oslo, against Slovenia and Sweden on Thursday and Sunday, Haaland will begin his summer break. He is not expected in Manchester again before the start of next month.

Another key factor for City is the number that will be on the back of his shirt.

There is still no confirmation of which number Haaland will wear next season – and that’s very significant from shirt sales and marketing points of view. For City, having the chance to sell products perfectly labeled for the occasion would be a golden opportunity.

Haaland has worn No 9 for the last two seasons at Dortmund and it is no secret this would be his preferred choice in Manchester, too.

It was revealed earlier this season that he and his camp were very keen for him to also wear No 9 with Norway to maximize the power of his brand. He has done so since March.

But at the Etihad Stadium, Gabriel Jesus currently has this coveted shirt number. The Brazilian’s future at the club is uncertain and City will not stand in his way if a suitable offer is on the table, with his contract running out in 2023.

However, the first-team unit have a very clear stance: as long as Jesus is a City player, they do not want him to be stripped of his shirt number.

It would send a bad message to the rest of the dressing room, with players preferring that any changes of number come in a more natural way.

At Manchester United, for example, Cristiano Ronaldo reclaimed the No 7 shirt he’d previously worn for the club from Edinson Cavani when he returned last summer after 12 years playing in Spain and Italy, with the Uruguay striker moving to No 21.

Jesus’ camp, though, have been considering their options for a long time.

The Athletic revealed last month that Arsenal were exploring options to sign him and their manager, Mikel Arteta, was a big admirer of the Brazilian in his days as Pep Guardiola’s City assistant. Arsenal’s failure to qualify for next season’s Champions League has made the north London club less desirable but they will still be an option.

The 25-year-old wants regular first-team minutes whether he stays or goes. Jesus has not been able to establish himself as a solid starter in his five and a half years at the Etihad – not even after the departure of Sergio Aguero last summer – and there is a World Cup just around the corner.

Jesus has reclaimed his spot in the Brazil squad after being left out for their March fixtures but he needs more game time to maintain it. And Haaland’s arrival is another sizeable obstacle in his bid to compete with Guardiola’s other front line options.

In Manchester, they know that Jesus has been monitored by multiple clubs around Europe. Given his age and his performances on big occasions this season, City would expect to get more than £ 40 million if he does move this summer.

“He is worth every penny,” a senior source added.

A rock-star unveiling event full of Haaland No 9-branded shirts would surely be worth it, too.