Manchester City striker Erling Haaland only turned 22 in the summer. He’s made just 21 appearances in the Champions League but is already up to 26 goals.

To put that in context, he’s only one goal behind equaling Luis Suarez’s goalscoring tally in the competition and four behind Wayne Rooney. Not only that, but he’s already outscored some truly great players.

The Norway international’s 26th Champions League goal was a spectacularly acrobatic late match-winner against his former club Borussia Dortmund in a 2-1 victory for City.

“The people who know me maybe know the influence Johan Cruyff had on my life as a person, as an educator, as a mentor, as a coach and everything,” said Pep Guardiola.

“Years ago Johan Cruyff scored an incredible goal in Camp Nou for Barcelona against Atlético Madrid similar to Haaland. The moment Erling scored I thought: ‘Johan Cruyff’. It was quite, quite similar. It was an incredible assist by João and the finishing from Erling was exceptional.”

Mentioning an all-time legend like Cruyff in the same sentence as Haaland is high praise, but the rising star belongs in great company. Here are nine superb players that Haaland has scored more Champions League goals than.

Fair enough, Scholes was a midfielder so it’s not exactly a fair comparison.

But the remarkable thing is Manchester United’s former No.18 is his sheer longevity in the competition. The midfielder made his Champions League debut in 1994 and made his last appearance in Europe’s most prestigious cup competition in 2012.

Scholes won it twice and appeared in three finals. He featured in 17 different seasons, made 124 Champions League appearances – over 100 more than Haaland – scoring 24 goals, including some belters. 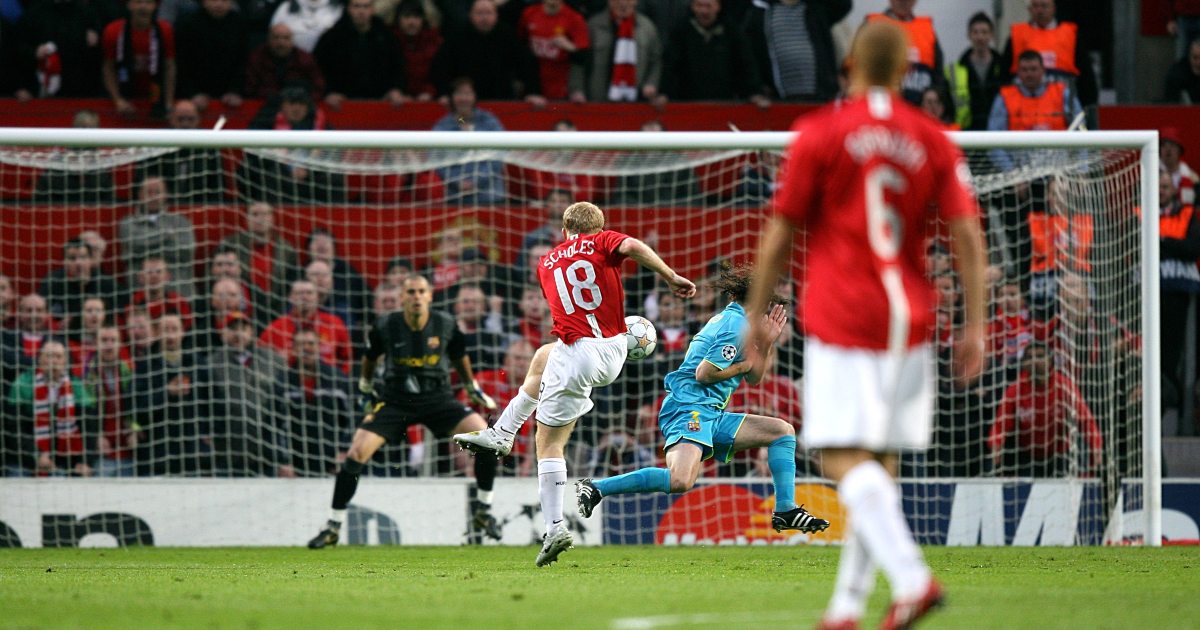 READ: A celebration of Paul Scholes’ goal against Barcelona, ​​his greatest ever

The England international made his Champions League bow back in 2014-15, with a five-year head start on Haaland. No player has more appearances under Pep Guardiola, and for seven years Sterling featured regularly for a Manchester City side that was among the favorites to win it.

He scored his 25th Champions League goal – and first in the competition for Chelsea – in the 1-1 draw with RB Salzburg, but the same evening Haaland scored yet again to remain one goal ahead.

The Argentinian featured as a centre-go for some of Europe’s most glamorous clubs – Real Madrid, Juventus and Napoli – with almost four times as many Champions League appearances as Haaland, 83 to the Norwegian’s 22.

It’s easy to scoff at Higuain and remember him trudging around the pitch with a pained expression, but for a period he was one of the best strikers around, particularly at Napoli and early on at Juventus.

Van Persie featured in 11 different Champions League campaigns for Arsenal and Manchester United. He scored 25 goals in 59 appearances, at a more than respectable rate of almost one-in-two.

A few years back, you wouldn’t have believed it would be possible for a 22-year-old to eclipse his goalscoring record. Yet here we are.

Jurgen Klopp’s Liverpool have dominated the European competition over the past five years and Mane has been among their most outstanding players.

The 30-year-old has started in three finals, scoring in one, and is now up to 57 Champions League appearances. Twenty-four goals in that time was a more than decent record – still is – but Haaland’s arrival has skewed the scales somewhat.

The Argentinian great boasted a wonderfully decorated career. He scored in the Champions League for five different clubs – Parma, Lazio, Inter, Chelsea and AC Milan – across nine seasons featuring in the competition.

25 goals in 65 appearances, including nine for Inter in 2002-03, always looked an impressive return. A little less so when you place it next to Haaland.

When you think of the former Spain international tearing apart Real Madrid for Liverpool, lifting Ol’ Big Ears with Chelsea, or enjoying a late-career swansong back at boyhood club Atletico Madrid, you might be surprised to hear he only scored 20 Champions League goals .

None more memorable than this one.

We couldn’t forget this iconic goal! 🤩

The England captain has scored 20 goals in 26 Champions League appearances. That’s the best goals-to-game ratio of the players we’ve selected here by some distance, bettered only by you-know-who.

Fewer goals in the competition than Haaland. We need a lie-down.